What Is Solar Distillation?

Nowadays, there is a huge requirement to find methods to supply water for the world’s population. Several countries are facing water inadequacy &/or have residents who use & drink tainted water. Finding different methods to utilize our renewable resources, like solar energy, has become an interest in developing efficient desalination plants. Solar distillation is the process of utilizing energy from the sunlight to separate potable water from salts & other contaminants.

Solar water distillers are mostly used in remote regions where there is limited access to potable water. The fundamental principles of solar distillation are simple but effective, as distillation recreates the method nature makes rain.

Solar distillation works on two principles: evaporation & condensation. The salts & minerals don’t evaporate with the water. For instance, table salt doesn’t turn into vapor till it gets to a temperature over 1400-degree Celsius.

However, solar distillers still do take a specific amount of power for water to turn into vapor. While a particular amount of power is required to raise the temperature of a single kg of water from 0- to 100- degrees Celsius, it takes five & one-half times that much to convert it from water at 100-degree Celsius to water vapor at 100-degrees Celsius. Practically all this power, however, is given back while the vapor condenses.

Most distillers are simple black-bottomed containers filled with water & topped with clear plastic or glass. Sunlight that is absorbed by the dark material hastens the rate of evaporation. After that, the evaporation is trapped by the clear topping &funneled away.

Most contaminants don’t evaporate & that is why they are left behind. However, most distillers require to be about the size of six square meters to generate enough water for one person for a single day. Multiple solar water distillation systems are needed to produce a large amount of distilled water.

If you want to build efficient desalination plants, solar water distillation can be the answer for you.

What Makes Solar Distillation So Efficient?

Solar distillation systems are convenient for remote, semi-arid, or arid regions for small capacities. But what makes it so efficient is its environmental & socio-economic benefits. Let’s take a look at them before you look for efficient desalination plants:

Solar water distillation systems are economically viable in the desalination of saltwater in many efficient desalination plants. It is a simple as well as cost-effective low-carbon tech. Non-polluting, free of cost, non-exhaustible solar power is used to generate distilled water inside a solar distiller.

Well, the energy needed to evaporate water (the latent heat of vaporization) is 2260 kJ/kg (kilojoules per kilogram). However, this means that to generate 1 liter (that is 1 kilogram as the density of water is 1 kg/liter) of potable water by distilling saline water needs a heat input of 2260 kilojoules.

Moreover, this doesn’t allow for the efficiency of the distillation system sued that will be less than 100-percent, or for any retrieval of latent heat that is spurned when the vapor is condensed. However, you must note that, even though 2260kJ/kg is needed to evaporate water, but to pump a kilogram of water thru a 20meter head needs only 0.2kJ/kg.

Therefore, solar distillation is mostly considered where there is no regional source of freshwater that might be easily lifted or pumped.

Like in many efficient desalination plants, for higher efficiency, the solar distiller must maintain

A higher feed temperature can be achieved if:

Like in many efficient desalination plants, a significant temperature difference can be achieved if:

We hope the above article will help you learn more about the solar water distillation system & how efficient it is compared to others. Generally, it differs from other more energy-intensive methodologies, such as reverse osmosis or simply boiling water because of its usage of free & eco-friendly solar energy.

Call to Action: Are you searching for the best & efficient water desalination equipment? At Keiken Engineering, you will find the best water distillation equipment along with extra engineering services & personalized advice for your application. To contact us, call +34 91 057 72 54 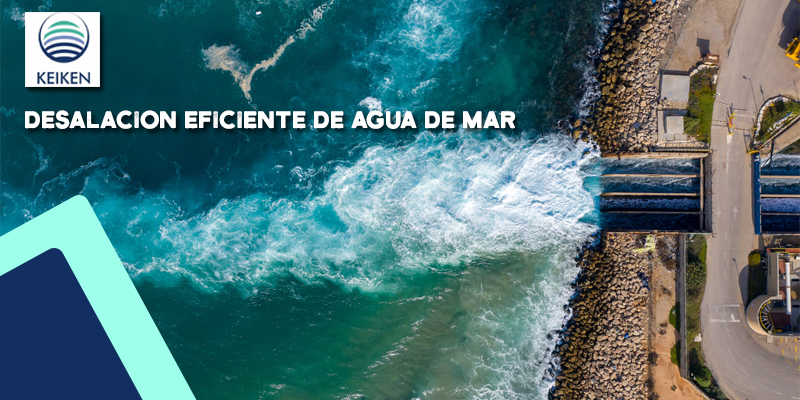 What are the problems faced during saltwater desalination?

What to Expect from Pilot Water Treatment Plants?

Why Desalination of Seawater by Reverse Osmosis Is the Best Option

Read more
top-menu (english)
We use cookies to ensure that we give you the best experience on our website. If you continue to use this site we will assume that you are happy with it.Ok